What if I told you that a political action committee created by some of Michigan’s most powerful labor unions – called “Protecting Michigan Jobs” – outsourced its jobs… to India, Sri Lanka, and Bangladesh?

Talk about taking hypocrisy to the next level. 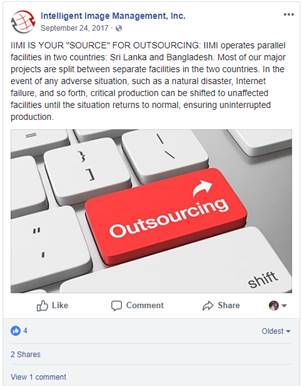 According to recent financial transparency reports filed with the State of Michigan, the “Protecting Michigan Jobs” committee spent $80,000 hiring labor through a company called Intelligent Image Management, Inc., a firm that brags about being “your source for outsourcing.”

It's a delightful irony that the group most responsible for impugning the motives of free market construction groups based here in Michigan are sending $80,000 of their members’ money overseas. Heck, the company doesn’t even have a Michigan PO Box!

For union bosses, it’s not about “Protecting Michigan Jobs,” it’s about protecting their lavish lifestyles with your tax dollars.

Deadline Detroit: Gretchen Who? Whitmer Struggles for Name Recognition
Michigan Capitol Confidential: The Michigan Politicians who Approved $6 Billion in Business Subsidies
Do you like this post?
Tweet