We’ve all heard about “fake news.” Donald Trump, Barack Obama… everyone agrees it’s a problem. But there’s something more dangerous and pervasive than the occasional partisan hatchet job in the press.

We call them “big lies.” 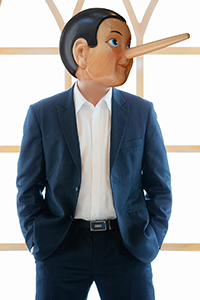 Our own Greg McNeilly writes in yesterday's Detroit News:

So what’s a “big lie?” While politicians and journalists may make up salacious stories or launch partisan attacks,

sometimes out of whole cloth, these stories tend to focus on individual circumstances or personalities.

Big lies are rooted in something much deeper and pervasive– they infect our media and politicos’ basic understanding of the world and how it works, and in doing so, affect the way they report, communicate, and govern. They become the cement that keep rigid ideologies inflexible.

Greg’s column highlights a number of these big lies.  For instance, the idea that differences of opinion equal hate speech, that Democrats are the party of science, the Marshall Plan fallacy – the idea that bigger government and bigger spending solve every problem – and the idea that there’s no problem in Michigan’s schools that won’t be fixed by writing a big check.

Check out this week's column to learn more, and don’t buy the “big lies.”