The road to Hell is paved with… your tax dollars? 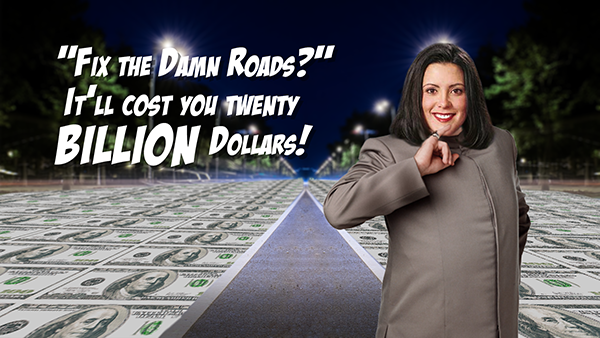 She must have forgotten that Michigan voters only a few short years ago went to the polls and overwhelmingly defeated an even smaller road tax hike proposal.

Our own Greg McNeilly writes in today’s Detroit News:

In the last decade, the state government’s budget has jumped by more than $14 billion, and the rate of that growth has outpaced the rate of income growth. For fiscal year 2006-07, state government’s budget came in at $41.9 billion. By 2017, that budget had grown to more than $56.5 billion.
Tax cuts work.  They attract talent, they grow jobs, and they create bigger revenues for Lansing because more people are working, shopping, and paying their bills.
Instead of $20 billion in new taxes, Michigan workers deserve an income tax break. Lansing has promised it for years and repeatedly failed to deliver. The next governor should.